The Curious World of ‘Car Cruising’

A young mother is fighting with the latch of a collapsible pushchair when the first roar and cackle of a modified car fills the car park.

She looks up and follows the car's slow meander to the far end before it comes to a stop. It then reverses, across two parking spaces at a 45 degree angle.

We all love cars. And it is like a big family.

There's an unnerving disconnect between the decibels emanating from the engines and the gingerly careful manner in which they are being driven into the car park.

You're told the reason they are parked at 45 degree angles is two-fold - that they look better that way and it allows people more room to move around and admire them.

But you wonder whether it is also simply to avoid any paint damage should two owners open their doors at the same time.

Car cruising is a hobby under threat, though. 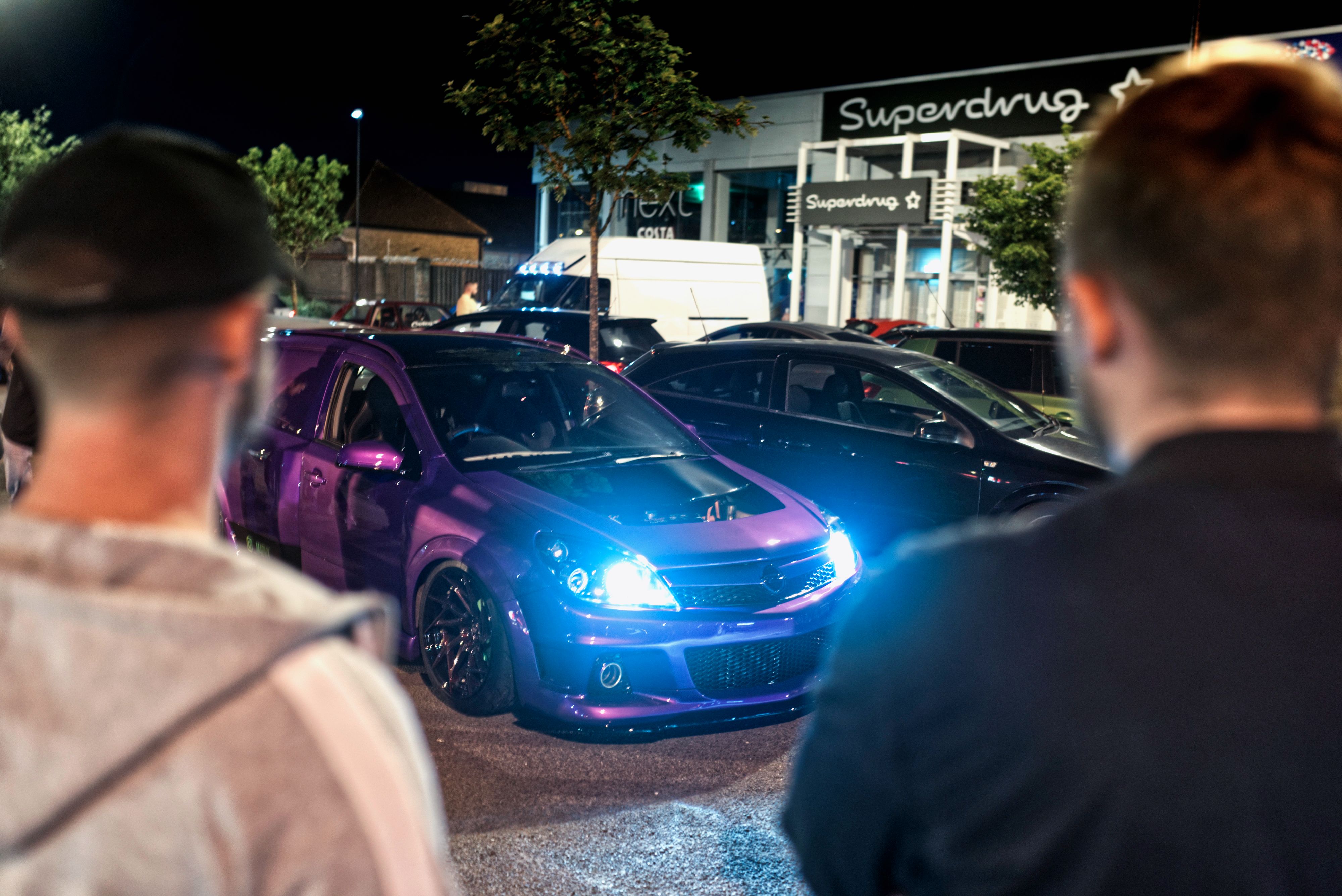 While not in itself illegal, some participants have been known to commit offences such as speeding or anti-social behaviour. Static events on public car parks - such as this one in Dunstable - are often tolerated by the authorities but those on public roads or where offences are committed are not.

Police have recently shut down events in Birmingham, Derbyshire and Cambridgeshire while there are also injunctions against cruising in Southend and parts of the West Midlands.

The accident in Stevenage has also attracted negative headlines around the world.

Here in Dunstable, however, there is no sign of any anti-social behaviour. The enthusiasts here blame a small minority of "idiots" for their image problem and say cruising is a family-friendly hobby like any other.

Six years ago Kirsty Elliott, 27, met her future husband Luke at a car meet in Milton Keynes. Their daughter Phoebe, wearing pink ear defenders, has joined them for the meet. 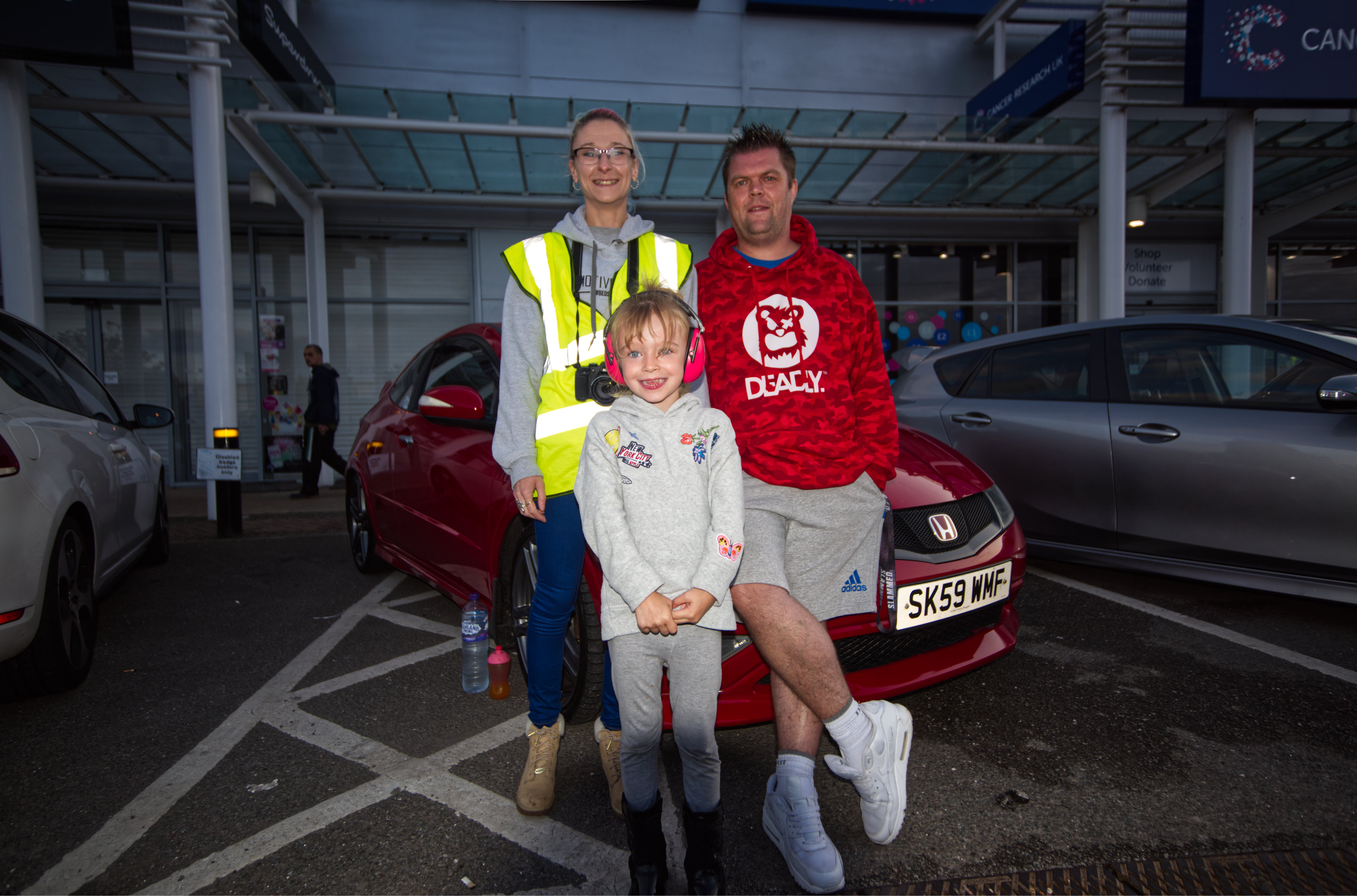 "We are all here for the same thing," she says. "We all love cars. And it is like a big family. We get to know each other's lives, we are there for each other and it is just a big friendship group."

The meet is marshalled by a team of yellow-vested volunteers who are poised to oust anybody misbehaving. This includes anyone revving their engine for too long, driving too fast or performing a doughnut - a manoeuvre in which a circular skid mark is left on the road. Organisers warn they will take the car registrations of offenders and ban them from future meets. The aim, they say, is to ensure they remain a safe place for car enthusiasts of all ages.

"The car scene has been hit hard," adds Kirsty. "The stigma with it is getting bad. I get why the police have shut some meets down because sometimes they are dangerous and I'm all for that.

"But we don't want this to go, we want it to carry on for future generations.
"I just want people to know that we are just normal people - I know police officers who come off duty, army officers, solicitors, people you would not imagine would be into this.

"In the summer we get our deckchairs out, we buy our food from wherever we are and we just sit there and chat. We love what we love and it is no different to people liking their hobbies, or trains, or planes.

"I know people who spend all their wages on their cars, people who put £20,000 to £30,000 into each of their cars. We are not boy racers."
One of the most admired vehicles at the Dunstable meet is Roger Giugno's purple 700bhp Vauxhall Astra van. The alloy wheels alone set him back £4,000. 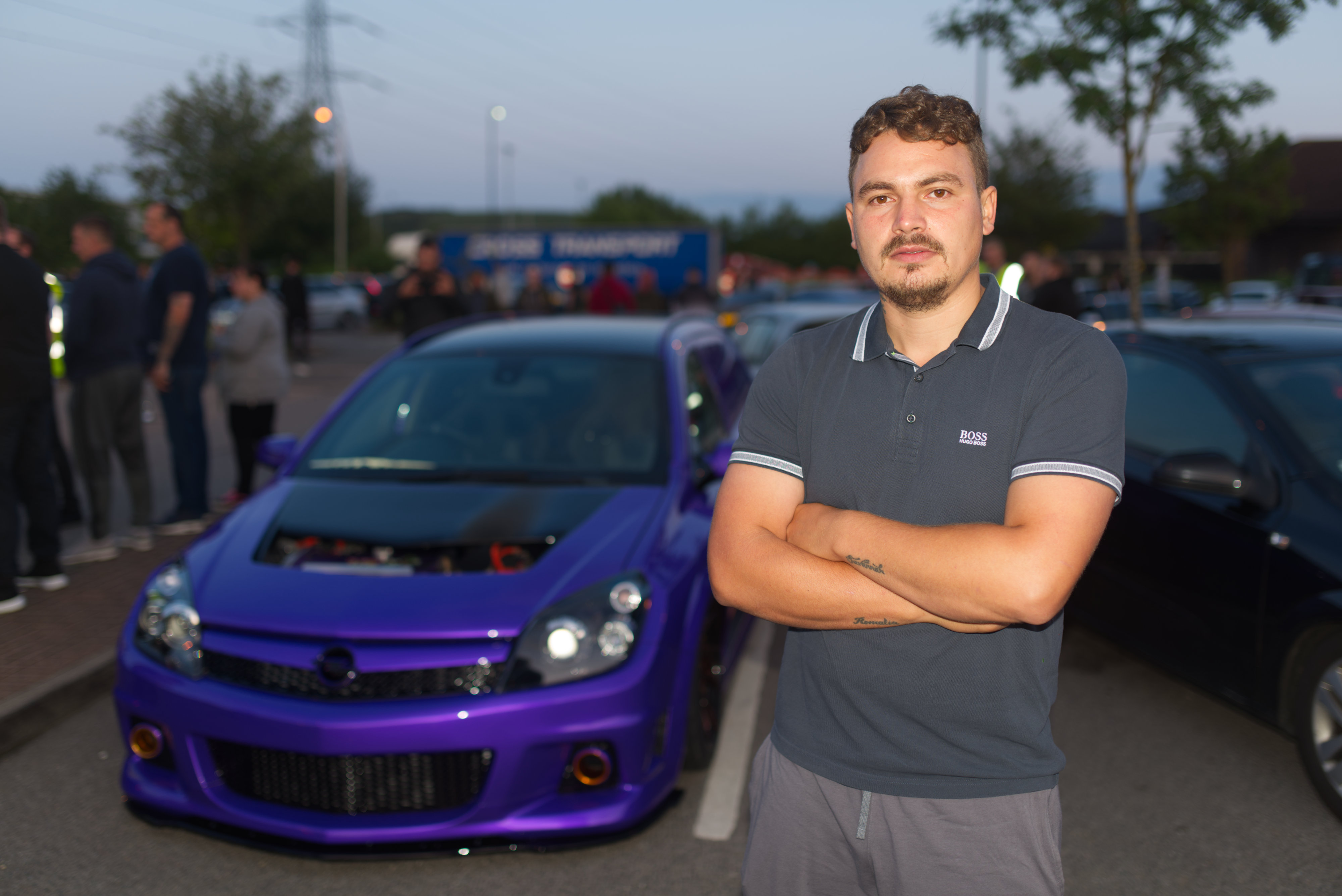 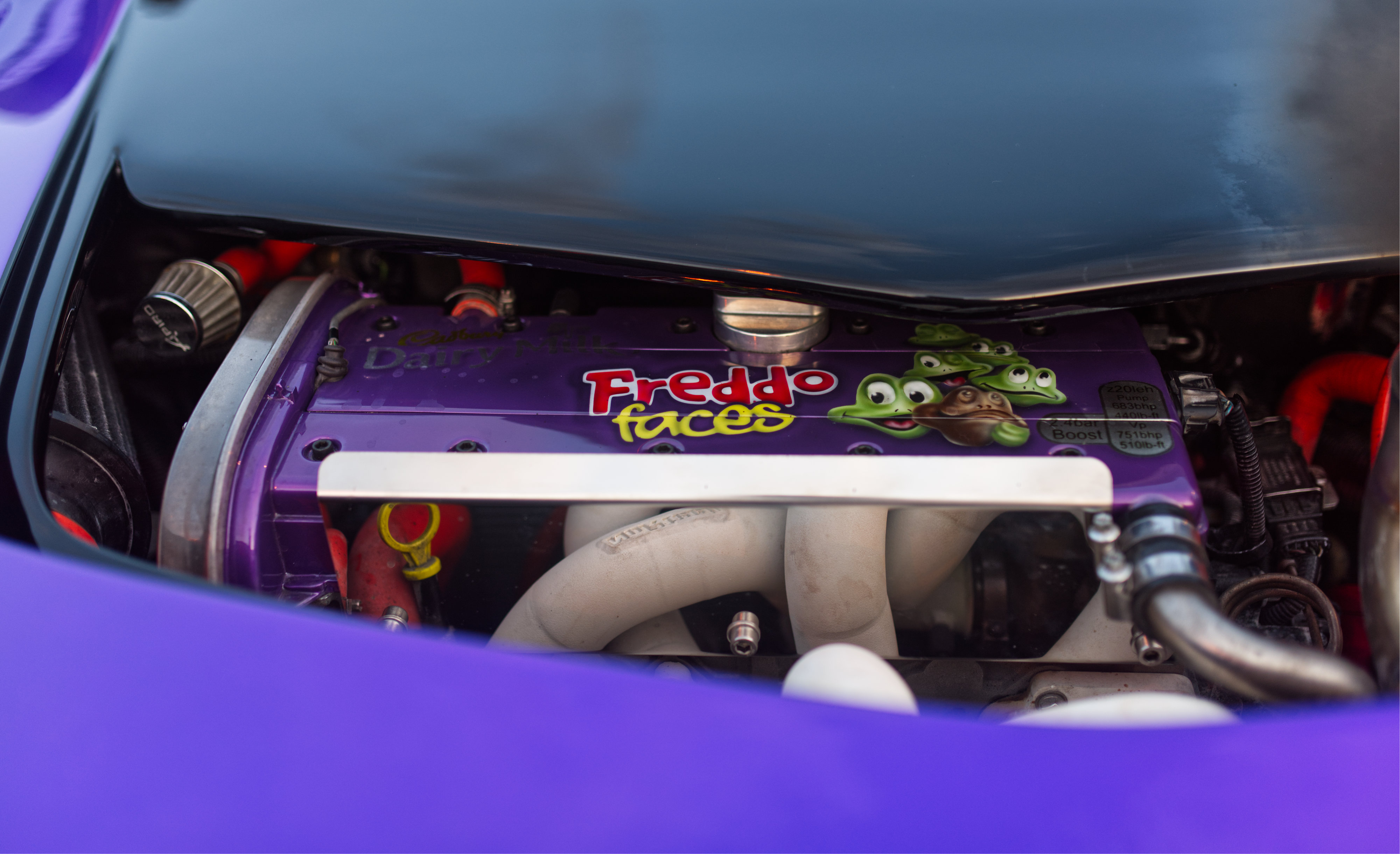 "It is my pride and joy," he says. "I put all my time into this, it is my hobby. The people here appreciate the work that's been done and it is a big community really. It's just fun, you know?"

Darren Bacon, 50, has been modifying cars since he was a boy and currently drives a modified Ford Focus. His stepson and stepdaughter are also at the meet, in their own cars.

"I come for the atmosphere," he says. "It gets you out and it is just like a nice gathering. And it's a family outing.

"It is a passion. It is about letting people see what you've done and appreciating what other people have done with their cars. It is brilliant." 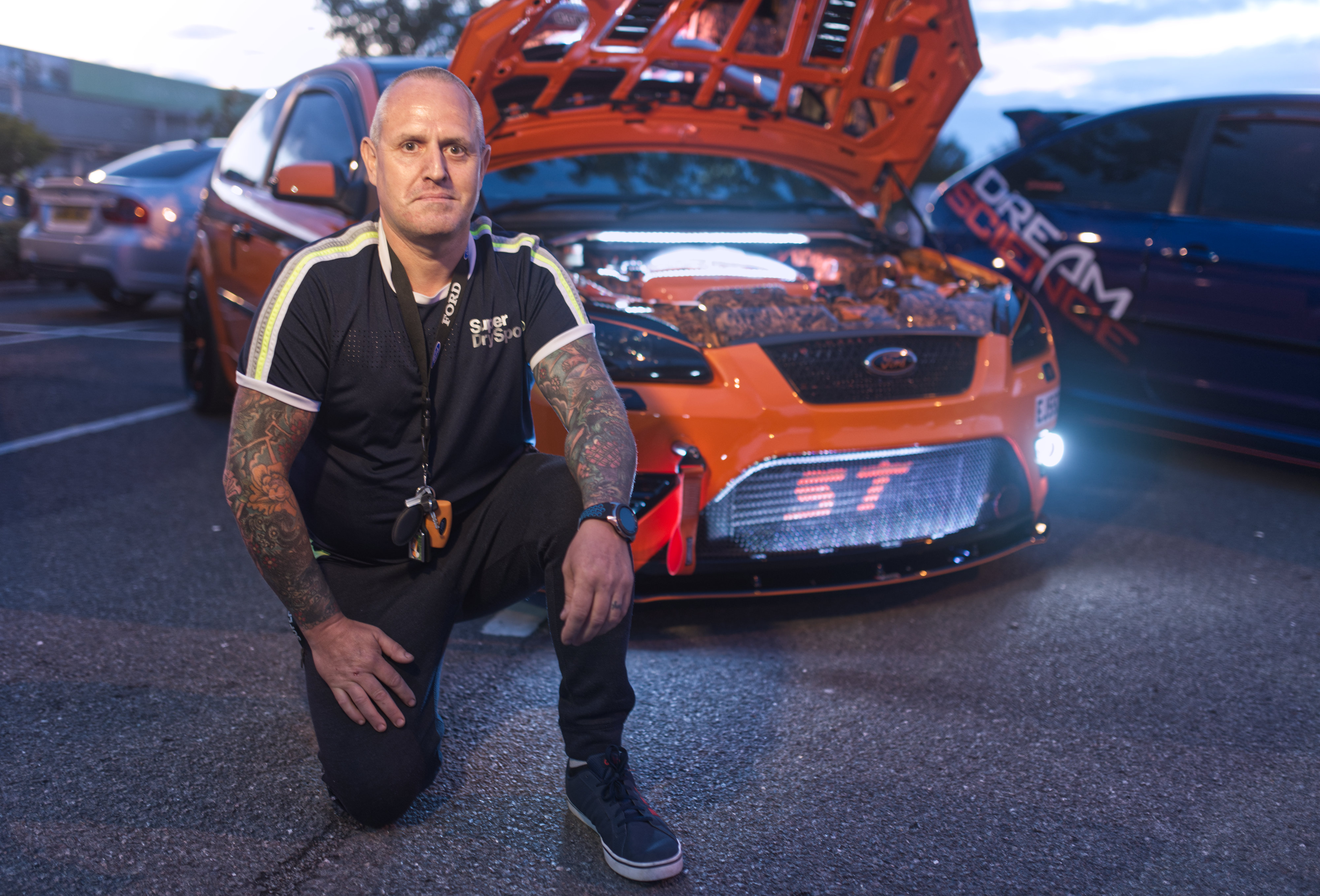 Not all modifications have cost owners a small fortune.
Bryden Poole's Skoda Felicia features a remote-control multi-coloured light show which is beamed down on to the bitumen.
He made it himself using a lighting strip purchased on a well known internet auction site and "a bit of soldering".

"Everyone is each to their own," he says. "You come to the meet and speak to people about their cars. I build my car for myself and drive around and enjoy it."

He describes people who drive their cars like 'boy racers' as "idiots". 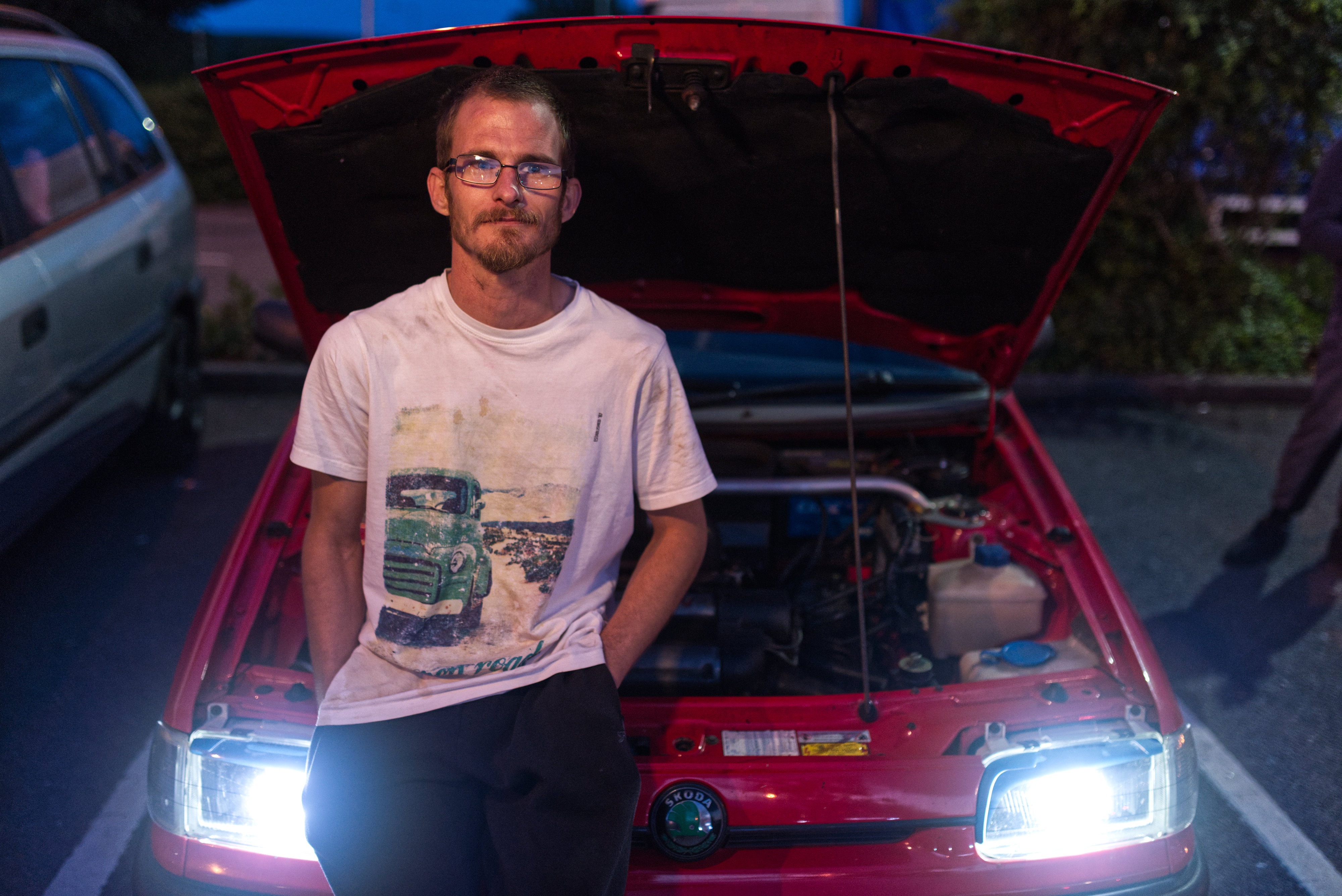 "Racing around with people at the side of the road? No, that doesn't appeal to me at all, it really doesn't. I'd much rather come here, park up, walk around and chat to people."

Some might wonder why such car enthusiasts don't just exhibit their beloved wheels at major organised car shows.

According to Nick Rance, organiser of the Dunstable meet, many do. But, he says, many of the cars would not be accepted at such shows because their condition is either not "good enough" or the vehicle not rare enough to win a place.

A person of means could buy a rare or exotic vehicle and take it straight from the showroom it was bought from and on to a show ground.
But that misses the point of car meets like this one. These are all about the owners' involvement with the car, the changes they have made to their vehicles and the blood, sweat and oil spilled over them.

Owen Dawkins, 30, is a case in point. He bought his Ford Escort XR3i - a model long associated with "boy racers" since the 1980s - for just £200 12 years ago. He had spotted the car on the street and made the owner an offer.
Owen hopes to keep the car for as long as possible and has no interest in exchanging it for anything else.

"Don't judge a book by its cover," he says. "This car is a classic and it only comes out on Sundays. If it looks like its going to rain, it doesn't go out.
"It looks fast, it looks aggressive, it looks like I'm a boy racer.

This piece was published on the BBC News website on July 31, 2019 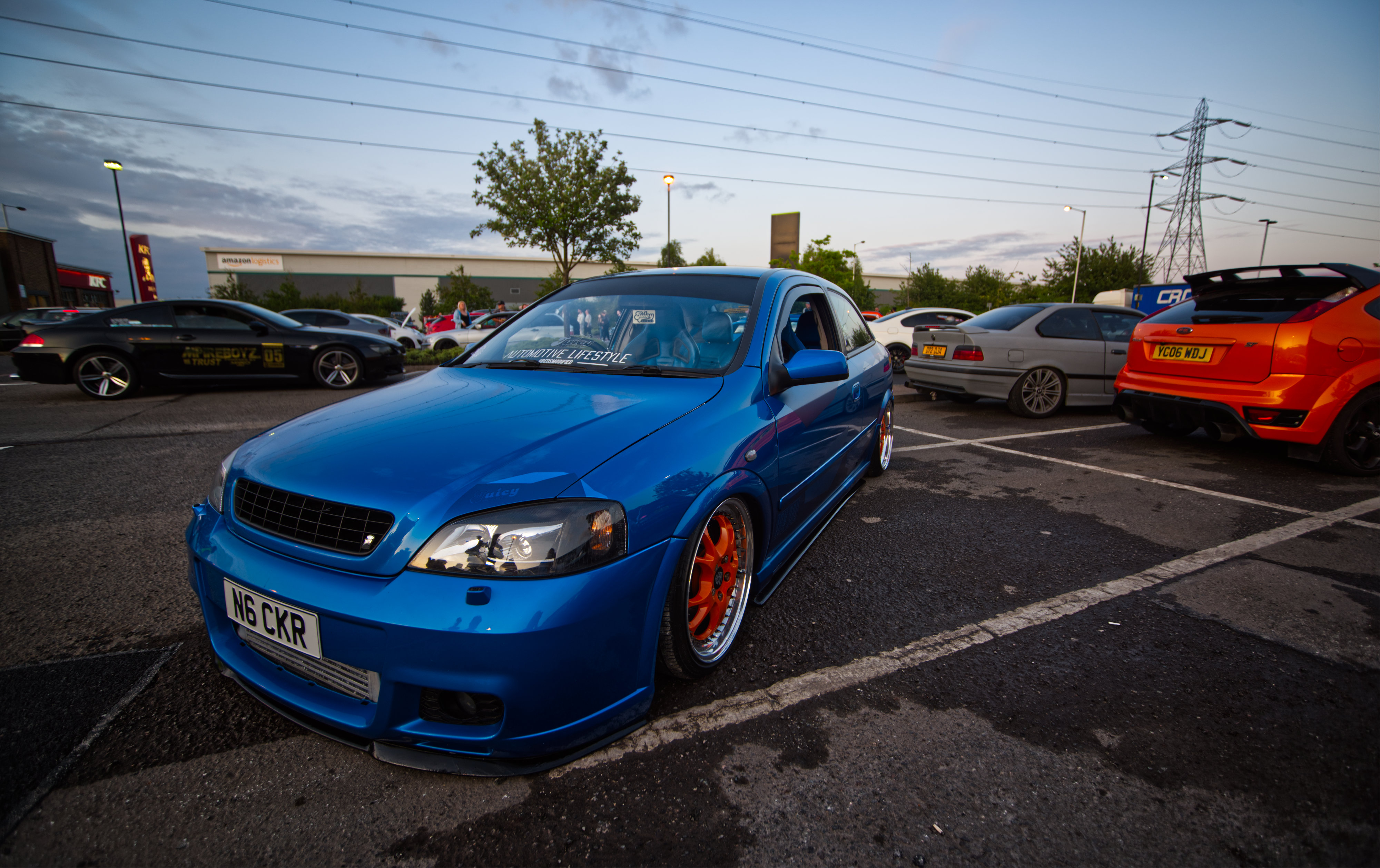